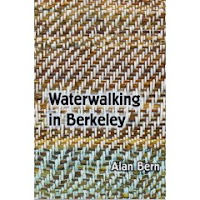 Sunday evening I had two poets over for workshop. Haven’t done workshop in years. Kent opened us a bottle of chardonnay and that probably helped loosen the ol’ tongue. I’m not a fan of workshop, really. I like it for community but I’ve never felt it returned value commensurate with the effort, time, anxiety put into it. I’ve learned what I’ve learned about revision through reading poems I like, yes, but mostly by sounding my poems, thumping them and shaking them, reading & rereading them, and allowing myself to cut them and mend them, to graft to them unwieldy limbs, to force march them down muddy roads, to let them take over and ride me. I’ve seen so many poems subjected to workshop that in reatction to critique only seem to get worse (mine included). I can’t remember any that improved. Such an event ought to stand out.

There were three of us working the shop. Alan Bern (who brought his new book, Waterwalking Berkeley), John Selawsky (a poem of his is here), and myself. I had more fun that I expected. I think the key was that I got to talk poetry. The particular poem didn’t matter so much. I would read the poem and talk about what I saw there, what I liked and disliked, what I thought clever, what I found tiresome. Did I do most of the talking? Probably.

When I searched for poems by John online I was amused to see DIR appear among the search results. Was invoking his name a summoning? Who knew the man would walk into my house eight months later?
Posted by Glenn Ingersoll at 3:27 PM