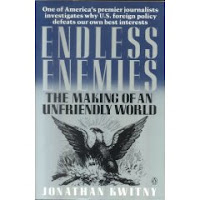 Caught a cold so “I lay around and drank peppermint tea, threw back vitamin C tablets, and kyolic garlic capsules, read Endless Enemies -- all about the U.S.’s shitty foreign policy.”

The next week I wrote: “Finished Endless Enemies: The Making of an Unfriendly World by [Jonathan] Kwitny. He argues very convincingly by just showing that the best foreign policy is noninterventionist, in which the U.S. supports the principles that make it great rather than worrying endlessly about the latest dictator and whether he’s a ‘friend’. We’re the biggest economy in the world, he says. Everybody wants to be our friend – if only we (our govt) didn’t make itself such an asshole around the world.”

In his Amazon.com review Robert Carlberg says, “Jonathan Kwitny, a former NYT reporter, describes in excruciating detail U.S. foreign policy disasters in Zaire, Angola, Iran, Afghanistan, Guatemala, Cuba, The Philippines, China, Lebanon, El Salvador, Vietnam, Korea, Ethiopia and elsewhere -- and frankly after a couple hundred pages of this I was simply too dispirited to continue reading. I'm probably naive or idealistic or both, but I want to believe my country stands for the principles expounded in our Declaration of Independence. Reading this exhaustive, carefully-researched, emotionally-detached and factual account to the contrary turned out to be painful and destructive to my civic pride.” Another reviewer adds, “Although this book is over 15 years old, everything it states still seems … to be true.”

Says William Blum, “The section on U.S. involvement in the overthrow of Mossadegh in Iran in 1953 was largely excised from a 1986 Penguin Books edition due to a libel suit brought against Kwitny by former New York Times reporter Kennett Love.”

And, finally, and you might call this ironic, Kwitny, the NYT review insists, is no leftwing socialist. He’s a free market purist! “[W]hen a free-market economy is allowed to compete openly with a Socialist one, the former wins the battle every time. … But the United States won't let that competition happen … For a variety of complex reasons, mostly having to do with either misguided ideology or sheer greed, this country keeps obstructing the free play of developing economies.”

Kwitny’s thesis would be one of the supporting documents for my contention that even if what Iraq really needed was Democracy at the Point of a Gun, the U.S. government (especially the Bush regime) was not going in there for democracy’s sake. After all, if Bush believed in democracy he would support it here.
Posted by Glenn Ingersoll at 10:23 AM