The Winter-Spring 2006 issue of The Chattahoochee Review arrived today. I don't know why. I don't have anything in it. There's a letter included that asks for subscribers. I've written a poem on the back of it. Which I probably won't send to Chattahoochee Review. But who knows? Maybe I've sent them work in the past. I do like the word "Chattahoochee" and I went through a period I sent first to magazines with names I liked.

Only a few contributors look familiar. Leonard Susskind has an essay about not alienating Christians just because they're stupid (hey, he says, evolution has saddled scientists with human stupidity, too!) The poets Martha Zweig and Lola Haskins ... I know I've SEEN these names before. Not that I could characterize their work. "Her son vomits as he crawls / downstairs, and they know he may not / live this time, but they laugh because / he looks so comical -- fifteen and not / mastered walking yet." -- Haskins. Francisco Aragon. Which I recognize as I name I've confused with a Bay Area poet or two: Francisco Alarcon?

I'm often struck by how dull the opening line of a poem is. "I could fold laundry every day" ... "Who would have guessed, loves" ... "Down the street from my sister's house" ... "We were hauling boxes of supplies" ...

What makes these interesting as lines? A line, to justify its being singled out as a unit by the line break, ought to give the reader something more than if it were presented as prose.

The first I quote does give us a second line that offers up an excuse for the first's banality. "I could fold laundry every day / for a thousand years", it's a set up but the third line is the real punchline, "and never satisfy the women in my life." (Richard Peabody, "Folding Laundry in My Dreams")

Usually, though, the second line isn't much help. The second first-line quoted above turns out to be mid-sentence. The title begins the sentence: "The Muse // Who would have guessed, loves / To hear stories about Roberto ..." I suppose for those who've heard of him the third line offers up a punchline of sorts when it reveals it's Roberto Clemente that the Muse likes to hear about. Apparently he is somebody one might have heard of. The voice of the poem builds up to a casual slangy sauciness. Looking through the poem I can see lines that are interesting as lines. Seems like to me the poem could have been structured to put one up top. ("My Muse", Rick Campbell)

"Down the street from my sister's house / Where I am staying for the summer" ... If I resolved never to read past a dull first line then told myself, oh just this one time Glenn, and found myself stumbling across line number two here ... sheesh ... what can I say? ("Retards", George Bilgere)

"We were hauling boxes of supplies / from our boss's old office to Tifton, the dark" ... I don't know that it helps that Liz is being smothered by a "blanket of morning" ... ("Almost a Love Song Close to Tifton, GA", Liz Robbins)
Posted by Glenn Ingersoll at 4:46 PM 4 comments: Links to this post

what I bought at the Petaluma Poetry Walk

Geri Digiorno has been putting together the Petaluma Poetry Walk for the last ten years. I'd heard she had a new book from Red Hen Press. So I was hoping she would have copies for sale. It's nice looking, though I'm a bit puzzled by the book designer's choice to completely elide her face. I'm also a bit disappointed that so few of the poems are new to me. Oh well. Maybe I should think of White Lipstick as Geri's Collected Poems.

I also bought the second issue of North Coast Review from its editor, Vince Storti. He said he had run out of the latest issue. The review is not filled with A-listers but I do recognize many names from the Bay scene, some of whom I quite like (some I don't): Lucille Lang Day, Jack Foley, Dale Jensen, Kit Kennedy, Ivan Arguelles, H.D. Moe.
Posted by Glenn Ingersoll at 11:17 AM No comments: Links to this post

what I bought at the SF ZineFest

We're just back from SF where Kent & I dropped in on the ZineFest, organized by John Porcellino. He did the fest promo design. I've been buying his self-published mini-comics for 15 years. I've never written to him, though I toyed with inviting him out to lunch or something when I learned that he had moved to San Francisco. Turns out he & wife Misun will be moving back to Denver in a month. They came to town so she could study acupuncture.

ZineFest was like a mini-APE. Because I was buying from the creators I tried to be freer with my money. Yes, I can afford it these days, have to remind myself.

So let's unpack the bag:

An Inside Job, a collection of dream comics by HOB/Eli Bishop.

Not My Small Diary #11, a mini-comics anthology of autobiograhical shorts edited by Delaine Green.

Manic D Press had a table so I picked up the just published new book by Justin Chin, Gutted, and Beth Lisick's This too can be yours, two for the price of one!

Kent went for Mary Van Note's Bradley, a stick figure graphic novel. Its subtitle: "a story of seduction" ... "Bradley" in cross-stitch on a swatch of white material is stapled to the front cover.
Posted by Glenn Ingersoll at 3:00 PM No comments: Links to this post 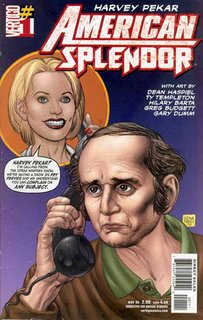 I picked up the new issue of American Splendor, surprised to see it published by Vertigo, DC Comics' non-superhero/mature readers line. They can't have looked at publishing Pekar as a chance to cash in. Inside there are two 2-pagers and two longer pieces. The longest piece chronicles a day in which Harvey is trying to get the New York Times to cough up the money for something he did for them while trying to get his 16 year old daughter to keep him apprised of her movements (she just disappears!) and coax in the housecat who escaped when daughter left the door open. An eventful day! Kent laughed at the inappropriateness of the cover ads for PlayStation games.

I bought Katharine Roger's biography of L. Frank Baum at Half Price. I saw it last time I was in and passed it up. I've read a library copy. But I decided I ought to have a good Baum bio and I did like reading it so I went ahead and bought it this time.

Yesterday I passed a box of books left at curbside and fished out You'll Never Eat Lunch in This Town Again, which is supposed to be a hilarious indictment of Hollywood. 600 pages?
Posted by Glenn Ingersoll at 10:39 PM No comments: Links to this post