I picked up Walter Mason’s Destination Cambodia in the library a couple weeks ago. I’ve been enjoying Mason’s stories. The title may be generic but the writing has personality.

When we were in Cambodia last November Kent and I did not take buses (the tour company’s hired coach doesn’t count), but the bus we took down the Mexico’s Baja peninsula a few years ago had loud movies playing so I could identify with this:

The bus driver played DVDs of Korean pop music for the whole five-hour drive, probably because there was hardly anyone on the bus and no-one seemed to care. In truth, he actually played only two DVDs of Korean pop, the same two, over and over again, obviously favourites of the young conductor who would often reach over to repeat Big Bang’s “Fantastic Baby.”

I looked up Big Bang’s “Fantastic Baby.” The boy band wears freaky costumes and I love the deadpan reading of that refrain: “Wow. Fantastic baby.”

So “Fantastic Baby” is Korean not Cambodian. We did a layover in Inchon on our way to Southeast Asia. That counts, doesn’t it?

On the other hand I’m now on the lookout for something else mentioned in Destination Cambodia:

Suong Mak was the author of a … novel that was thought to be the first ever in Khmer to talk about gay male relationships.

Mason recounts a delightful story about Suong Mak as a teen writing his first fiction (a ghost story) and his mother’s help in finding a publisher. Seemingly the search ends in disappointment. Two years later, having moved to the big city to attend university, Mak comes across his story in a bookstore. Not only did it get turned into a book, the publisher is happy to have Mak show up to ask about it and hand him over money, as the book is doing well.

I looked up Suong Mak. He has a blog, which is very much in Cambodian. Google Translate currently does a terrible job with Cambodian. Too bad. If it’s true the novel is “being translated into English,” I want a copy when it’s ready. I like the title: Boyfriend 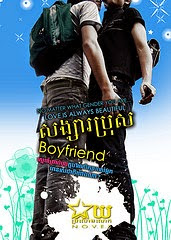 source: Destination Cambodia: adventures in the kingdom by Walter Mason
Posted by Glenn Ingersoll at 7:00 AM

Labels: gay, outside US