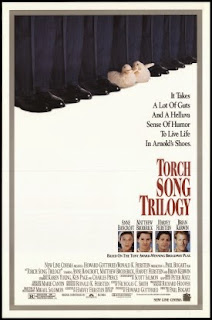 Torch Song Trilogy
written by & starring Harvey Fierstein, based on his play(s)
1988. a movie I saw in the theater

Saw this a couple days ago. Films about gay people, even with their faults, seem to me more real than the usual hetero fare. But Torch Song Trilogy is good anyway (should I say, besides). Fierstein plays Arnold Becker, a female impersonator (his profession), who isn’t particularly effeminate when not performing. The story charts his life from when he meets and falls in love with a bisexual man. The relationship is too secretive for Arnold’s tastes. Eventually the affair ends & Arnold is pursued by a lovely young man who wants a longterm lover. This young man (David?), played by Matt Broderick is killed by gaybashers in NYC.

About a third the way through the film I noticed that it was slightly out of focus. While this has happened to other movies I’ve seen at UAs I couldn’t help wondering if it was subtle sabotage by the projectionist. I dint go out & complain as I didn’t wish to miss any of the film. If I see the film again tho’ I shan’t hesitate.

Torch Song Trilogy did not ultimately have a depressing ending, but it did leave me sad the rest of the day.

I read the play (or, rather, trio of plays) a year previous. I wrote about that 8 years ago on DIR. Sort of. Actually, mostly not. My entire review of the book version, as noted in my diary: “Quite good.” Faced with that paucity of comment, I spent more time in the 2007 DIR post talking about how out of focus the screening of the movie version was. We like our clear lines.
Posted by Glenn Ingersoll at 7:00 AM