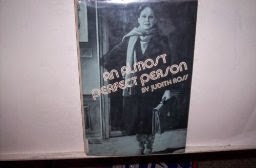 I read this in searching for a dialogue to perform in Reader’s Theatre. I read snatches of it in the JC library before checking it out and it sounded promising. And it is amusing. There wasn’t a dialogue of the type I was looking for. A woman runs for a New York City congressional seat. She loses. This play documents her sexual liaison with her former campaign manager & her dead husband’s best friend. It’s quite tame and rather sit-com-y. A pleasant if untaxing play. It’s dated a little. Some good lines.

One thing that annoyed me about the JC library: before putting hardcovers on the shelf, they discarded the dustjackets. I like to include in these posts the cover image of the edition I read. In the case of hardcovers that I checked out from the JC library (and, later, the UC Berkeley library, which has the same practice), there was no cover image. Was the reason budgetary? The public library saves the dustjacket, wrapping it in mylar. Public libraries are that much richer than academic? It seems to me of educational value to retain the dustjacket. At the very least dustjackets record design history. They often also have author photos and selected critical notices which disappear when the dustjacket is removed. Blurbs give a book context. If you’re researching an author’s influences and connections I could see how looking over the blurbs given their book by more famous authors would help. Since the copy of An Almost Perfect Person that I read was owned by the JC I probably didn’t get to consider the cover image. Published plays often feature a photo of the original cast, plus costume and set. Losing that is unfortunate. I found a snapshot of the original hardcover posted at Amazon by reviewer Kim Hill. How a 70s woman politician dressed!
Posted by Glenn Ingersoll at 7:00 AM