We Are Your Sons: the legacy of Ethel and Julius Rosenberg 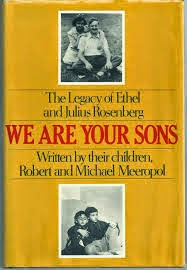 We Are Your Sons: the legacy of Ethel and Julius Rosenberg
written by the children, Robert & Michael Meeropol
Houghton Mifflin Co., 1975

Begins with an engrossing selections of letters by Ethel and Julius to their sons, to one another, to Emanuel Bloch, their lawyer, and to the public, most of which were written while the two were incarcerated at the Death House in Sing Sing. Michael Meeropol provides connecting narrative, filling in some of his memories of family life before the notorious spy trial and after. How he and his younger brother (by 4 years) Robert lived for a time with their maternal grandmother. This woman sided with her son David Greenglass, against her daughter and son-in-law and told her daughter as the date of the execution moved nearer: “I mean even if it was a lie, all right, so it was a lie, you should have said it [David Greenglass’ testimony] was true anyway! You think that way you would have been sent here [the Death House]? No, if you had agreed that what Davy said was so, even if it wasn’t you wouldn’t have got this!” Ethel quotes her mother in a letter dated Jan 21, 1953.

Michael and Robert were placed in a Jewish children’s house which Michael remembers as mostly torment. He was seven, Robert three, at the time of their parents’ arrest. From there they went to live with their paternal grandmother, then to a young couple. After the execution of their parents they were adopted by Anne & Abel Meeropol, although at the death of Manny Block they were nearly taken permanently from this new family via legal maneuvering by New York officials.

An interesting and fast-reading book. It gives few details of the trial or the adult Rosenbergs other than those remembered by Michael and, of course, the words of the Rosenbergs themselves in their letters. …

Robert recounts the brothers’ adulthood experiences. Each became involved in the youth movements and New Left of the Sixties, although in somewhat different ways.

Finally the book ends with Michael’s political analysis of the events leading up to and the reasons behind the prosecution (persecution?) of his parents.

I think this is a valuable book. I have a couple other books waiting that delve into the case itself, but this is a rare memoir — the testimony of two innocent victims of the Cold War. And the Death Penalty. Hm. Four innocent victims? I was thinking of Robert and Michael, yet Ethel & Julius went to their deaths proclaiming their absolute innocence.

For my Reader’s Theater class I performed the letter from Ethel Rosenberg which I excerpt above.

Julius and Ethel Rosenberg were executed by the US government in 1953 for providing the Soviets information on creating atomic bombs. Did they do what they were convicted of? If they did spy for the Soviets, was executing them appropriate?

I remember my mother being uncomfortable when she saw me reading this book. I don’t think we figured out how to discuss it. The Rosenbergs were her contemporaries, only 3 to 6 years older, and I’m sure she had opinions about them at the time.

We Are Your Sons was the first work of any substance that I read on the case. Robert and Michael are convinced of their parents’ innocence. It was easy to take their side. How could you not feel for someone whose parents were killed, even if by the state for supposedly just reasons?

My mother was a proponent of the death penalty. As a kid it made sense to me; doesn’t a murderer forfeit his right to life? Gradually my sympathies shifted. The criminal justice system is fallible. Some laws are plainly unjust. I decided it was better not to give the government permission to kill people. Better to err on the side of mercy and put the priority on addressing the social causes for crime than go along with the mistakes that will take the lives of innocents. My mother may have come around. I don’t remember exactly, but I did talk her into changing her mind on some things.

What made me pick up the book in the library? Part of it would have been its uniqueness. Name another memoir written by the child of an executed spy. Part of it would have been a couple novels, which I had either read recently or considered reading at about that time. E. L. Doctorow’s The Book of Daniel was based on the Meeropol boys and was made into a movie in 1983, the title shortened simply to Daniel. I hadn’t seen it but I certainly heard about it. I read The Book of Daniel at some point. Probably before reading We Are Your Sons, but I don’t remember how the reading of either book informed the other. The second novel would be Sylvia Plath’s The Bell Jar, which doesn’t spend much time on the Rosenbergs but has that striking first line: “It was a queer, sultry summer, the summer they electrocuted the Rosenbergs …”

Posted by Glenn Ingersoll at 7:00 AM