Our Time Has Come: a delegate’s diary of Jesse Jackson’s 1984 presidential campaign 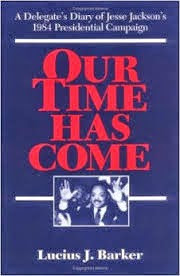 In 1988 Jesse Jackson made a second run for the presidency. I remember splitting my California Democratic primary delegate vote between Jesse Jackson and Sen. Gary Hart. Did I do that in 1984 or 1988? Looking over the Wikipedia pages for the campaigns I’d guess it was ’84. I’m pretty sure I was ready to go all in for Jackson in 1988; besides, I don’t think you could split your vote the same way in ’88.

I attended my first (& so far only) presidential campaign rally when Jesse Jackson came to the Santa Rosa fairgrounds to give a speech. I remember Eric Shanower wearing a Jackson ’88 campaign pin at the Oz Convention that year. (When I met Kent I discovered two Jackson ’88 campaign coffee mugs in his kitchen. We still use them.)

As an out gay man I was sick of the Democratic squeamishness around my kind, an attitude that hobbled the fight against AIDS as well as limiting the recognition of equality. Jesse Jackson spoke out for gay people and for major funding in the AIDS fight. It was thrilling seeing him win state primaries. It felt like there was Hope.

When I spotted Our Time Has Come at the library I was looking forward to at least some discussion of the ’88 run. Got none.

Our Time Has Come: a delegate’s diary of Jesse Jackson’s 1984 presidential campaign by Lucius J. Barker. 1988. University of Illinois Press

It’s curious that the book, emerging in 1988, deals exclusively with Jackson’s 1984 campaign. A bit disappointing because one would like some comparisons and contrasting of the ’84 with the ’88 campaigns.

Lucius Barker does go on. Goodly portions of the book could be excised without trauma (without noticing). He chose a strange middle ground between objective analysis and personal involvement narrative — strange because I got such a sense of “neither here nor there.”

Barker talked an awful lot about his objective/subjective dilemma — he talked about his dilemma. [I didn’t record what Barker’s “objective/subjective dilemma” was exactly, but I’ll guess the dilemma was what stance to take when writing about the campaign.] The old saw: Show, don’t tell. He does a lot of tell. Not nearly enough show. Yet until I find a better book about Jesse’s campaign this is better than nothing. I liked Barker’s observation that, win or lose, Jesse’s campaign gave a lot of minority and social justice-type people valuable experience in running a national presidential campaign, experience you can’t get elsewhere. Hope some of these folks move into positions of power and leadership because of Jesse’s runs.

The campaign began with black leadership divided between Jesse & Mondale, then came Lt. Goodman’s Jesse-made release from Syrian prison, then the overblown Hymietown remark, the frustrating convention where all of Jackson’s minority planks were not only defeated but ignored and the boffo speech (which is reprinted in this book and; reads well too).

The “delegate’s diary” of the title is just one chapter but gives a feel of the convention. More show than tell, finally.

I’ll make the prediction that if Jesse runs in 1992, his negatives will have come down — not all the way but some, and he will be first or a close second in those stupid “if the primary were held today for whom would you vote” polls in early 1992. Whether he’ll stay on top I won’t predict but I do think he’ll do better than in ’88. I’m not sure he can remain a perennial presidential candidate too many more years. ’92, I think so. ’96? The year 2000? I’m inclined to doubt that he’ll be a big force unless he does gain the presidency in the 90s. Who knows. What is he doing now I wonder … He made some statement about how corruption is not a color issue & bad when anyone engages in it, in reference to Marion Barry, Mayor of Washington, D.C., & the trouble Barry is in.

Jesse Jackson did not run again in 1992. I thought Jackson could build on his ’88 successes, since there was no Democratic incumbent and the people who had supported him were as ignored and discounted as ever. Arkansas Governor Bill Clinton came along and spoke up for gay people in a way no one had. Despite my doubts about a Southern politician really being there for us when the going got rough I pinned a Clinton/Gore political button to my college backpack.
Posted by Glenn Ingersoll at 12:24 PM

This is a longshot, but I'll ask you anyway. Do you remember a book that someone or other wrote as a memoir of his experiences volunteering for Fritz Hollings' 1984 presidential campaign?

It was published in 1986 or so and the author was interviewed in a brief segment on NPR's ALL THINGS CONSIDERED. I remember him telling the interviewer that the Hollings campaign sent him to Greenwich Village, where he found himself talking to "a lot of apolitical gay types" who were not remotely interested in Ernest F. Hollings.

Anyway, I haven't been able to find this book anywhere, I even contacted Senator Hollings and he didn't remember it. That's why I say it's a longshot, but I've been looking for it for 29 years, so I had to ask, just in case.

It's hard to imagine politically engaged "gay types" who would have been interested in an Ernest Hollings presidency, let alone apolitical ones. But maybe Hollings had some cred I missed.

If you've been looking for 29 years I'm guessing you've exhausted the web. (I did a quick WorldCat search -- library holdings worldwide, supposedly; but no luck.) If anybody has info on books about Hollings I'm thinking it would be a South Carolina library.

Well, Hollings did endorse Jesse Jackson when he withdrew in 1984, and again in 88. That alone should show that there was more to him than the Confederate flag. But it's true he does lean pretty distinctly toward the social conservative side of the Democratic Party, so yes, it is pretty funny to think of someone being assigned to drum up support for him in the Village in those days.

Anyway, thanks for the response! Your blog is great.

It would have been delightful to be able to answer a question that's been begging so long!

I didn't know Hollings had endorsed Jesse Jackson for president. One of the many things I didn't know, I'm sure, or long since forgot.

It wasn't really that surprising that Hollings endorsed Jackson. Not only was Jackson strong among South Carolina Democratic primary voters, but like the senator he was consistently as pro-labor and as anti-militarist as he could afford to be. They had other differences, obviously, but enough overlap that a great many Hollings volunteers did in fact show up to help with Jackson events after the senator dropped out.