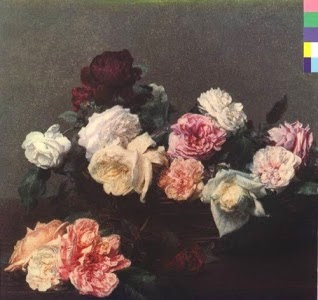 My fav. song is “Your Silent Face”, a mellowish, danceish, Kraftwerkish creation that sounds almost new age but is more fun. Definitely the high point of the album. The rest is okay tho’ little really stands out.

The record did not come with “Blue Monday,” which I otherwise would have called its high point. You could only get “Blue Monday” as a single at first. It was added to Power, Corruption & Lies when the album was released on CD.

I played “Blue Monday” on my radio show at London’s Imperial College. I have the cassette tape to prove it. Somewhere. Maybe.

Power, Corruption & Lies grew on me.

Posted by Glenn Ingersoll at 7:00 AM