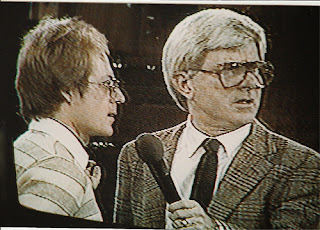 My mother was a DONAHUE fan. Phil Donahue’s talk show addressed serious issues that the cooking and celebrity focused talk of other daytime programming ignored. Abortion, gays … According to Wikipedia, consumer advocate Ralph Nader was Phil’s “most frequent guest.” Each episode’s guests would be seated on the stage and Phil would circulate through the audience with a handheld microphone offering audience members the opportunity to ask questions of the experts. It was a democratization of the questioning that was really refreshing, for a while, at least. DONAHUE gave me a chance to see real live gay people speaking up for themselves, witnessing for their lives. Even before I dealt with my own unresolved same sex attractions, I was fine with rooting for the gays who certainly should be able to live forthrightly, legally and safely. On DONAHUE questioning tended to be respectful. I don’t recall Phil necessarily including “the other side;” that is, the bigot contingent wasn’t obligatorily presented as a valid and equal authority on whether everyone got to have civil rights.

The Supreme Court has decided to review a Missouri law (?) that restricts abortion. So Donahue had a couple anti-abortionists, both young women (relatively) and two women who were pro-choice; and some guy from The New York Times (formerly) who reports on the Sup Ct gave a rundown on how the nine will likely vote. It infuriates me how the “pro-life” fools call the terms of the debate. [Those] who define the terms have already won. I thought of a “pro-life” counterpart. Why not call the pro-choice advocates “real life counselors,” or something. The Real Life Action Coalition.

Also the hour talk show — [with commercials] some hour — when dealing with a complex subject like this cannot even sketch the real situation. And the “debate” becomes largely a repetition of slogans and a shouting match — the pro-choicers never shout loud enough, they are too nice. More men stood up than I ever remember in a Donahue audience. [Is this irony?] The [men] were speaking on both sides of the issue — as were the women. The show’s concluding comment was from a teenage girl and she was cut off by the credits. I thought she made one of the best statements in the show because it was a chance to turn the debate. She said the “pro-lifers” seem so concerned about the “unborn children,” what about the “born children”? The “pro-lifers” seem uninterested.

The case that the DONAHUE guests were addressing was called, Webster v. Reproductive Health Services. The Supreme Court ultimately decided that the states could further restrict abortion, despite the Court’s earlier declaration in the Roe v. Wade decision that abortion was a right women held under the Constitution.

A few days ago there was a diary at DailyKos about Ohio Rep. Tim Ryan’s change of position on abortion. After listening to women describe situations that made their decisions about whether to carry a fetus to term something other than a simplistic Shall I Kill My Baby?, Ryan decided he would no longer vote to make abortion illegal. I left a comment:

I’ve been rereading my diary from 1989 and I came across a formulation that I proposed -- instead of Pro-Life being opposed by Pro-Choice, it seemed to me more accurately one should contrast the fantasies behind the "Pro-Life" position with "Real Life" as lived. Whatever we learn about fetuses it will still be true that they are sited in grown persons and that the real lived experience of the person must take priority.

“These women gave me a better understanding of how complex and difficult certain situations can become,” says Rep. Ryan.

It's easy -- way, way too easy -- to imagine a few cells burgeoning with potential as having a right to life, a right to develop into a human being. Why is it so so difficult to imagine the grown human beings struggling with all the things we have to deal with and recognize that some will make choices that nip the potential of those burgeoning cells? And that punishing women for making this decision is, at best, counterproductive to the professed (but actually fantastical) Culture of Life?

Real Life versus Your Dreamland.

Rep. Ryan woke up to reality?

In a debate it probably doesn’t help to accuse the other side of living in a fantasy world.

Anyway, let’s get back to the gays for a paragraph. I remember trying to suss out my attraction to boys by debating whether I felt any physical draw to Phil Donahue. Not even when he took off his shirt to be bound in clear plastic wrap on a show about packing your fat tightly so you wouldn’t look flabby. Not even then! Well. I will admit I did stick out the whole episode to make sure.