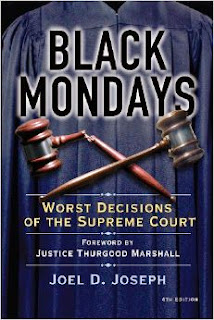 I didn’t find [all of] Joseph’s choices equally horrendous but some were undoubtedly spine-chilling.

The International Longshoreman’s Association (ILA) chose to protest the Soviet invasion of Afghanistan by refusing to unload Soviet goods. An American company which imports Russian wood sued for loss of business. The Supreme Court awarded the company several million dollars to be paid by the ILA. Joseph likens ILA’s boycott to the Boston Tea Party. He gets all puffed up about how there wouldn’t have been a revolution if not for the Boston Tea Party. I didn’t really get the connection. From what I understand about the Boston Tea Party, it was a symbolic violent act that we can all point to and say, “Ah! Something happened!” but it didn’t really have much effect. The Boston Tea Party was violent and would be illegal if it happened today. The boycott of tea by the population brought more results. People just didn’t buy tea for a while because the taxes were so high. I’m not sure the analogy is the appropriate one. I need some clarification as to why the Supreme Court’s decision was so terrible.

The book also contained, very appropriately, the 1986 Georgia sodomy decision in all its awful glory. I think I’ll photocopy the pages.

Thurgood Marshall in his foreword says, “I [do not] find the wisdom, foresight, and sense of justice exhibited by the framers particularly profound … the government they devised was defective from the start, requiring several amendments, a civil war, and momentous social transformation to attain the system of constitutional government, and its respect for the individual freedoms and human rights we hold as fundamental today.” He says, “We the People,” for instance, didn’t mean black men or any women. He contends that the framers’ motives really weren’t too pure. Joel Joseph disagrees some, and in his introduction calls the Constitution “an excellent document.” [Joseph] says, “Most of the problems cited by Justice Marshall stem from those whose duty it is to interpret the Constitution.” He calls for some reforms: “A Constitutional amendment providing for judicial terms of ten years (with five years of additional salary for retirement or for a buffer period) would give judges independence while injecting new energy into the judiciary. An excellent judge could serve ten years at the district court level, ten at the appellate level, and ten at the Supreme Court. No judge would be allowed to be reappointed at the lower two levels. At the Supreme Court reappointment would be reasonable because the Senate exercises careful monitoring of the highest court.” [On the other hand because] the principle of ‘one person, one vote’ is violated by the [way] U.S. Senat[ors are elected, Joseph] propose[s] “the Senate be kept to one hundred [members, with] each state getting at least one.” The other 50, he says, should be apportioned by population. New York would get eight, say, while Wyoming would have to be happy with its one.

Ralph Ginzburg, in an early ‘60s case, ended up going to prison for eight months because he sent through the mails material (magazines) the Supreme Court decided were obscene, were pornography. One book he was convicted for distributing had, before being offered to the general public, been sold to “medical and psychiatric professionals.”

In another chapter Joseph says Congress should amend the postal law so that non-profits & individuals aren’t breaking the law when they put unstamped letters, notes or pamphlets in private mailboxes. He says, as to door-to-door salesmen, cities should not be able to prohibit them tho’ private citizens should be able to post “NO SOLICITORS” signs & expect these to be respected.

He says the Dred Scott decision (keeping the man & his family slaves) helped lead to the Civil War.

And Plessy v. Ferguson. Hmph. It still rankles that Chris & Julie think the Supreme Court justified in their decision. [Chris & Julie were American friends I hung out with on the London trip.] Plessy was arrested when he refused to vacate a “white” railcar. He was 1/8 black. Blacks were allowed to ride in white cars if they were “nurses” of white children. The railways disliked the laws because segregation was “inconvenient and expensive,” Joseph says. Plessy’s lawyer called this Jim Crow law “obnoxious to the fundamental principles of national citizenship, perpetuates involuntary servitude … under the merest pretense of promoting the comfort of passengers on railway trains.” The Supreme Court majority, in its ruling, cited as precedent a decision made before the Civil War.

Then there’s the awful Korematsu case in which the Supreme Court upheld the right of the Gov’t to intern the Japanese Americans.

And the Court’s rulings against the rights of women, even though the Constitution nowhere makes a distinction between male and female. Hm. “one man, one vote”?

A horrible case in 1987: the Creighton family, says the Court, can’t sue the government for barging into & searching their home, assaulting them, all without a warrant, supposedly (tho’ not actually) in hot pursuit.

Joseph ends with the sterilization of Linda McFarlin/Sparkman who got it done without even knowing it (Mom told her it was an appendectomy); and the cases of servicemen dying of cancer who aren’t allowed to sue the government.

I memorized the first four amendments to the U.S. Constitution the other day when I was reading Black Mondays: Worst Decisions of the Supreme Court. The book reprints the Constitution at the end. I finished the book with Peanuts [the cat] in my lap, and he was settled so nicely I dint have the heart to disturb him so I decided to memorize the Bill of Rights. I only got so far as the 4th Amendment & a phrase from the Fifth. I still remember them! How long will it last?

Posted by Glenn Ingersoll at 2:47 PM