Keep your medicines out of reach of your octopus

[B]iologist Roland Anderson … helped to design an experiment for a female giant Pacific octopus … named Billye. … A fellow female octopus named Pandora had gotten tasty hunks of herring in a screw-top jar, which over several tests took her an average of two minutes to open. Anderson … decided to … ‘offer [their captive octopuses] childproof pill bottles.’ … Anderson and his team at the aquarium had drilled small holes in the plastic bottle so Billye would be able to get a whiff of the meat inside. Fueled with this incentive, she managed to open the bottle … in … about fifty-five minutes. … With a little practice, she was able to get it down to an average of about five minutes.

It was the kind of child-proof bottle where you have to push the lid down while turning it. I just got one of those from the pharmacy. After I open one of those I won’t tighten the lid again. My mother often had me open her childproof bottles. There have been times I’ve been tempted to saw the top off.

source: Octopus! the most mysterious creature in the sea by Katherine Harmon Courage
Posted by Glenn Ingersoll at 9:58 PM No comments: Links to this post

Poetry & Comics in a Spinadoodle 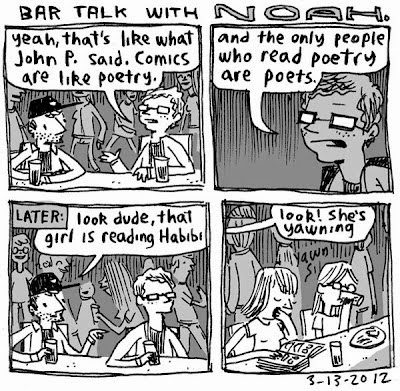 Two of my favorite things - poetry and comics. “John P.” might be John Porcellino, creator of King Kat Comics. I’m guessing so because John Porcellino’s work often feels like poetry to me, with his line drawings suggesting more than they explicitly depict, and their frequently contemplative quality. Is Noah in the strip disparaging comics for being “like poetry”? Chiding comics creators for making comics only another comics creator will want to read? It’s a common criticism of poets these days. The final panel might be a confirmation of Noah’s belief - the girl is yawning so Habibi (a book-length comic) must not be connecting with this reader? We don’t know whether the girl is a comics creator. I suspect the confirmation is meant to be gently ironic - it is being offered by a comics artist in comics form, after all.

I discovered “Bar Talk with Noah” in a collection of Sam Spina’s autobiographical Spinadoodle strips that I bought at the Alternative Press Expo 2012 . With all the eager artists and their often-impressive wares at table after table, the choice of what to actually buy ends up more random than you’d think. There are things one takes into consideration, of course. I bought Spinadoodles: the third year because - ? Because I usually like autobiographical comics. Because the price wasn’t bad. Because I liked the art. Because the artist was selling his work himself. Because the artist was cute.

update 5/20: Sam Spina confirms my suspicion: "I am talking about John P of King Cat fame with another really, really awesome cartoonist Noah Van Sciver in that strip."
Posted by Glenn Ingersoll at 5:56 PM No comments: Links to this post