"two guys who kissed each other – often"

SimCity and The Sims are games designed by a shy skinny guy named Will Wright. He worked on SimCity on spec while at Broderbund but that company couldn’t see a way to market it. Not until Wright formed a new software company, Maxis, with business partner Jeff Braun did SimCity get its chance. Gee, it was a huge success. In his book on the history of videogames Harold Goldberg describes the trouble huge success got more than one videogame company into at the end of the 90s when the tech bubble was in full expansion. “Maxis incurred pressure from investors to … earn big money. … [A]rrogant idiots were brought in as bosses. They knew nothing about games. …[B]ean counters forced Wright and his crew to release … generally unfinished, unpolished, sometimes untested games.” One of the bits of coding that slipped through was this instance of guerrilla gay activism:

While working on SimCopter, a programmer who was secretly annoyed that there were no gays in Maxis products surreptitiously added two guys who kissed each other – often. That did not sit well with Wright and Braun, who had made certain that Maxis did not discriminate and had health care benefits for gay partners. The employee was shown the door, but the damage was done. SimCopter had to be recalled, which hit the company’s stock hard, not to mention the harm it did to its reputation.

Goldberg does not make clear whether the blow to Maxis’ reputation had more to do with the poor quality of the game(s) or the gayness of the kissing. I’ve never played any of the Sim series. So I was curious about how they treat gay folks.

According to this post by Lyle Masaki at AfterElton, The Sims “was a breath of fresh air … The Sims' idea of love included same-sex romances. It was a welcoming touch of the real world.” As in the real world, Masaki says, gays could move in together but not marry. As of The Sims 3, however, “after a week of game time, I was able to get a male couple to plan a wedding party and tie the knot.”

And if you want to see some Sims-style gay canoodling, there’s a youtube video you can watch. (It’s kind of cute.)

source: All Your Base Are Belong To Us: how fifty years of videogames conquered pop culture by Harold Goldberg
Posted by Glenn Ingersoll at 6:49 AM 4 comments: Links to this post

Since the mid 80s Denise Herzing has been studying the spotted dolphins who live in the clear waters off the Bahamas. To help fund the project the research boat makes room for a handful of non-scientist observers, or “passengers,” as Herzing calls them in this discussion about mimicry in the new book Dolphin Diaries:

Humans in the water often try to ‘dolphin’ swim, which means keeping your legs together and undulating from the waist. For the most part we are pretty bad at it, jerkily swimming while barely moving through the water. As a well-meaning passenger followed a spotted dolphin trying to get his dolphin kick right, a second dolphin followed the human, but the dolphin used jerky and awkward movements mimicking the struggling human – a dolphin mimicking a human mimicking a dolphin!

source: Dolphin Diaries: My 25 Years with Spotted Dolphins in the Bahamas by Dr Denise L. Herzing

You can also check in on Herzing and the dolphins at the website for The Wild Dolphin Project.
Posted by Glenn Ingersoll at 5:04 PM No comments: Links to this post

Is Uncle Henry a Gale?

Before the house was swept away by cyclone little Dorothy “lived in the midst of the great Kansas prairies, with Uncle Henry, who was a farmer, and Aunt Em, who was the farmer's wife.” That’s the way L. Frank Baum puts it in the opening sentence of The Wonderful Wizard of Oz. The order in which they’re introduced suggests that Uncle Henry is Dorothy’s blood relation, with his wife Dorothy’s aunt by marriage. In a sequel to Wizard Baum gives Dorothy’s last name as Gale. He never (so far as I recall) explicitly says whether Henry’s last name is Gale, too.

At the Oz convention this summer I asked a couple friends and Oz scholars if they knew of any post-Baum Oz historian who had given Dorothy parents. Eric Gjovaag remembered an author who had written about Dorothy as though she were a real person and this author had suggested Dorothy was not biologically related either to her “Uncle” or to her “Aunt” but had been shipped West on an orphan train. I thought that an interesting take. I didn’t write any of this down so I’ve forgotten the author and title. I’ll write Eric and see if he remembers.

Anyway, I am reading volume one of The Complete Annotated Oz Squad by Steve Ahlquist and see that he has given Uncle Henry a last name different from Dorothy’s. A panel of the comic shows a mailbox. Explains Ahlquist, “The name on the mailbox is Snow, Dorothy’s mother’s maiden name. Uncle Henry is Dorothy’s mother’s brother.”

In volume two we learn that Henry’s sister is a prominent person in Oz who has been of much help to her daughter.
Posted by Glenn Ingersoll at 8:43 AM 2 comments: Links to this post

Nezahualcoyotl is a rare pre-Columbian American Indian* poet who is remembered by name. What caught my attention in the small print where editor William Brandon includes biographical material was the second of the two “popular names” by which Nezahualcoyotl was known. One of the names “was Acolmixtli (‘Lion Arm’), another was Yoyontzin (‘Beautiful Fucker’).”

Considering the variety of connotations “fucker” has acquired, from worst insult to admiring praise, and the fact that “fuck” doesn’t always (or even usually) mean the act of sexual intercourse, I find myself blinking at the moniker. Beautiful Fucker. A legendary name!

*Nezahualcoyotl was an Aztec king

source: The Magic World: American Indian Songs and Poems edited by William Brandon
Posted by Glenn Ingersoll at 7:48 AM 12 comments: Links to this post

I found The Magic World on the library book sale shelves at Berkeley Public Library’s North Branch. For many years the library has hosted these mini-sales for the Friends of the Library. People pay on the honor system, twenty-five cents a book. I think the Friends have finally decided not to support this arrangement. Or maybe it was the library administration. The shelves do take up space that could be used for something else. And I imagine the money they bring in is not great. 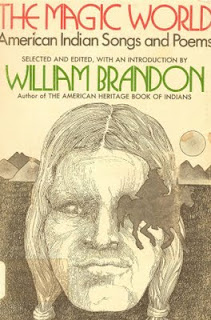 Still, it’s been a nice resource. Over the years I’ve found quite a few books of interest. Mostly yellowed classics. When I looked it over I didn’t remember The Magic World, though I went through several Native American poetry anthologies some years ago. The copy is in good shape, a lightly-read 40 year-old book. For twenty-five cents I figured it wasn’t a loss even had I read it before.

And I have. Enough time has passed, it seems, that I remember almost nothing specific, except for (curiously?) the typography. I find the cover ugly, a line drawing of a big-chinned American Indian man with his long hair parted in the middle and restrained by bands at the sides. A silhouette of a man on horseback seems to be riding out of the Indian’s left eye socket. Maybe I read an edition that had a different cover or a rebound copy. The pieces in the book are from a variety of sources, many not originally recorded as poetry – speeches, explanations, contracts. On the whole I wasn’t much impressed, but toward the back I came upon some pretty brilliant dream-like stories, the “Malecite Tale” being one. (A few pages later the Natchez tale, “The Cannibal’s Seven Sons,” confirmed for me that I’d read the anthology before. The poem is one I copied out by hand and have read over many times.)

The “Malecite Tale” above was first published in The Journal of American Folk Lore in 1917. According to Wikipedia, “The Wolastoqiyik, or Maliseet [Malecite], are an Algonquian-speaking Native American/First Nations/Aboriginal people of the Wabanaki Confederacy. They are the Indigenous people of the Saint John River valley and its tributaries, between New Brunswick, Quebec, and Maine.”

hat tip to VintageVida for the cover scan
Posted by Glenn Ingersoll at 1:36 PM No comments: Links to this post

[A]n adult male and female [were] swimming side by side in the weak November light. One had a baby draped over its head. Van Ginneken had seen this activity before as a form of play, with the mother lifting the infant from below or the baby swimming onto her head as if to hitch a ride. But there were only two spouts rising from this group of three. The baby, she realized, was dead.

Next, van Ginneken saw the male rise with its head high above the water as in a spy-hop. It was carrying the baby on its pectoral fins, held forward the way we would carry a child in our arms.

The observer, Astrid van Ginneken, is a scientist studying whales. She loses track of the infant and the male/female pair as they come upon a larger group of orcas. The orcas formed a stationary circle, “heads partly raised and facing inward …”

There in the middle floated the baby’s corpse. Time and again, the whales broke off, reformed their line at a distance, approached the infant, and spread out to face it in a circle. A storm gathered, sucking what little brightness remained from the sky. As van Ginneken’s boat left for shore, the ceremony was still being repeated.

source: The Grandest of Lives: eye to eye with whales by Douglas H. Chadwick
Posted by Glenn Ingersoll at 8:59 PM 6 comments: Links to this post