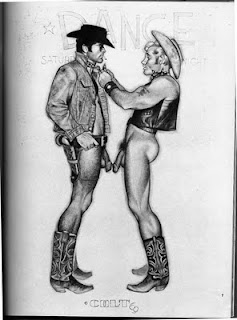 From a capsule tour diary of the Sex Pistols 1978 U.S. tour, their final tour:

… The band take the stage around 11pm, Lydon wearing a ripped tartan suit and his Tom of Finland gay cowboys T-shirt. The band are pelted with popcorn, beer cups, hot dogs, whipped cream, bottles and pies. Sid premieres his ‘Gimme A Fix’ DIY chest tattoo, shouts, ‘You cowboys are all a bunch of faggots!,’ has his nose bloodied by a beer can and brains a troublemaker with his bass.

Oh the irony! Sid Vicious calls the Texans faggots while his bandmate Johnny Rotten (Lydon) wears a tshirt of two affectionate cowboys with their gigantic cocks hanging out.

I snatched the image from PaulGormanis.com. That’s not the tshirt, which was sold in Malcolm McLaren’s shop SEX, McLaren being the Sex Pistols svengali, but the source image for the shirt’s design. It is not, says Mr Gormanis, a Tom of Finland drawing, but one by Jim French.

You can spot the shirt itself in a 1980 image of Boy George, pre-fame.

Great article. Check this out -- a photo by punk chronicler Roberta Bayley of Johnny wearing the shirt in San Antonio: http://www.texasmonthly.com/story/tour-sex-pistols?fullpage=1

Thanks for the link, Paula. The Texas Monthly article is worth a read, too.