Reading a book about a family in the Bronx I came across this curious paragraph, probably evidence of a change of mind by the writer (or an editor?) about whether to use the undercover officer’s alias:

Rambo, a Bronx homicide detective, changed out of his sweat suit and into a Con Ed employee uniform. Hulk’s choice of a disguise was appropriate: gas leaks, like fires, were common in the neighborhood. That morning, a tip had come in … Hulk and the other undercovers drove to Anthony Avenue. …

Rambo, nicknamed for his pumped-up body, was known for solving cases.

So which is it? Hulk? Or Rambo? It’s pretty clear from context that we are only talking about one person. I suspect the real nickname was “Hulk” as the Hulk is known mainly for being big & beefy, whereas Rambo is known mostly for being a loner and revenge-o-phile. But who knows. Maybe we have the author to thank for both.

source: Random Family: love, drugs, trouble, and coming of age in the Bronx by Adrian Nicole LeBlanc
Posted by Glenn Ingersoll at 7:36 AM No comments: Links to this post

I don’t know how my family acquired The People’s Almanac, which was published in 1975; I was ten at the time. Was it a gift?

I knew kids who’d claimed to have read the dictionary and the encyclopedia (Britannica or World Book?); neither project appealed to me. OK. Yes. I did try reading a dictionary a few times. Boring! As suspected.

Something about that title fascinated me: The People’s Almanac. I didn’t know what an almanac was. The People’s Almanac was not like The Farmer’s Almanac, which included “a calendar for the year as well as astronomical information” (that’s from the Microsoft Word dictionary definition of “almanac”). Rather, The People’s Almanac was a seemingly random collection of information – a year by year history of the U.S. (1797: “In retirement, General Washington dined well. One of his favorite menus: cream of peanut soup, Smithfield ham with oyster sauce, string beans with mushrooms, Southern spoon bread, Virginia whiskey cake.”), thumbnail descriptions of all the nations (“Nauru is composed largely of phosphate-rich guano or, as it is better known, bird droppings. This unusual resource has provided Nauruans with one of the highest per capita incomes in the world …”), supposed buried treasure troves, words commonly misspelled, offbeat artists, stories of great boxing matches, and so on.

The idea of imbibing all these facts was far more fascinating the actual process – there was just so much information, I discovered, about which I did not care!

Still, wasn’t there something special about the possessive? The “People’s” … I recognize it now as particularly 70s. At the time it had an aura of rebellion, offering a fresh new take without the tired old rigidity and irrelevance of the established authorities, whoever & whatever they were. Oughtn’t something belonging to “people” also be more fun? Such seemed logical to me at the time.

When I was clearing out my mother’s house I brought The People’s Almanac and its sequels home to Berkeley (aka “The People’s Republic of Berkeley”). They sat on the floor of the library upstairs – the shelves having already been taken by other books. Now that renovations are going on the books have all been boxed up and sit once again in inaccessible stacks. I didn’t box The People’s Almanac.

Because I decided I wasn’t going to keep it anymore. That old ambition, that I was going to sit down and read the thing through? I’m letting it go.
Posted by Glenn Ingersoll at 2:09 PM 3 comments: Links to this post

Labels: where I'm from

word of the day: pyrrhuloxias 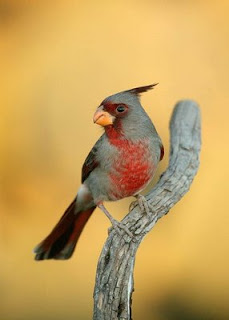 “[R]ed birds such as cardinals and pyrrhuloxias … apparently need sufficient carotene from reddish fruits to maintain their plumage colors, so they feed on red berries. Such berry specialists will pick up chile [chili?] fruits now and then, which are about the same size, hue, shape, and brightness [as] the birds’ mainstay berries. … [W]ild chiles fequently become established under wolfberries and hackberries, for they are probably dispersed beneath the canopies of these shrubs when the birds pick their berries. Once they have germinated there, they find a buffered microclimate more suitable for growth than open, barren ground.”

photo from Birds as Art
Posted by Glenn Ingersoll at 3:59 PM No comments: Links to this post

Mossberg stands up to Swisher’s mother

“Mossberg is not shy about expressing his opinions. He helped recruit Kara Swisher from the Washington Post [to the WSJ] in late 1996 … When she and Megan Smith, a Google executive, decided to marry, Swisher told [Ken Auletta], her mother ‘was troubled by the idea of a gay wedding.’ She and Smith have two children, and she recalls that when she came home with the first baby Mossberg was there, and so was her mother, who ‘really likes Walt a lot.’ Swisher went on, ‘We were having dinner and she was being difficult – she was arguing with me. I was getting really uncomfortable. Walt took her down like I’ve never seen anybody take anybody down: “How dare you talk to her like this? This is an important issue and you have to be supportive no matter what as a parent.”’”

Gay marriage as a political issue is really about straights. It seems to me straights ought to be talking to straights about it. Would Mossberg be up for a 30-second ad?

“Although the [18th Century Romantic] era’s effusive declarations of passionate friendship were long discounted as overheated formulas for merely platonic affection, the reverse is more likely: in a time of harsh public scrutiny, more went on physically than all but a few writers dared commit to paper.”

One might note that even though the kiddies danced to the hits of the Village People and the Navy considered using one of their songs in a recruiting campaign and straights still gesture to “YMCA” at ball games, the band members exemplify gay sexual fetishes. It may have been the case that lots of non-gay folks innocently adopted the language of passionate friendship but that hardly erases the passion or means it was always chaste.

source: Pictures and Passions: a history of homosexuality in the visual arts by James M. Saslow
Posted by Glenn Ingersoll at 7:08 AM No comments: Links to this post

Them Christians, still a bunch of butt-in-skis.

source: Pictures and Passions: a history of homosexuality in the visual arts by James M. Saslow
Posted by Glenn Ingersoll at 7:05 AM No comments: Links to this post

In a New Yorker profile of Milton Bradley and his Game of Life Jill Lepore says Life is in “a class of board games [called] ‘spiral race games.’”

“The oldest spiral race game,” she says in a parenthetical, “may be the Hyena Game, played by Arabs in Sudan, in a groove traced in the sand with a stick and involving a race between pebbles representing the players’ mothers, who leave their village and head to a well at the spiral’s center, where they must wash their clothes and return home before a hyena catches them.”