“Cartoonist Gary Larson once drew a Far Side cartoon showing a bunch of cavemen being warned about the danger of stegosaurs, and he called their tail weapon a ‘thagomizer’. Denver paleontologist Ken Carpenter thought that ‘thagomizer’ was a good name, so he used it in his 1993 scientific presentation of the most complete Stegosaurus ever found. That name stuck, and now it is accepted scientific nomenclature to say that stegosaurs are characterized by having a thagomizer.” 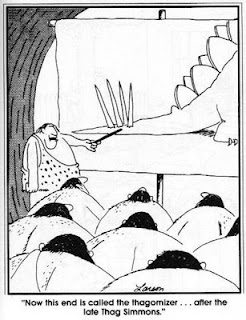 Posted by Glenn Ingersoll at 11:09 AM

I didn't know that. That's awesome.