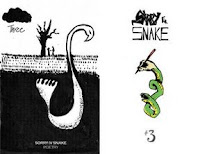 I found issue #3 of Sorry for Snake, a digest-sized, saddle-staple lit zine, on the poetry shelf at Pegasus. The editors are Sara Mumolo and Jack Morgan, both former members of the Trainwreck Union. My post about the Trainwreck Union still has the DIR record for number of responses – not to mention kerfuffle! Not long after the Union fissioned, it seems.

Jack Morgan has gone on using the Trainwreck blog, though it’s his personal blog now. He started a press, Stormy Petrel, and it’s under that aegis he’s produced Sorry for Snake. I’m guessing all the work is solicited as no “writers guidelines” appear in the magazine or on the Stormy Petrel site. But it looks like it’s gonna come out pretty regular, as Jack’s now offering subscriptions.

There are 9 poets in the issue: Matthew Rohrer, Feliz Molina, Jared White, Mark Cunningham, Trevor Calvert, Gillian Hamel, K. Silem Mohammad, Juliet Cook, and Erika Staiti. Only K. Silem Mohammad is a name familiar to me. When I look through a long list of a literary magazine’s contributors, it surprises me that after 25 years of regular poetry reading so few are names I recognize. It is true that I’ve been delighted by a poem then discovered that the poet who wrote it had work in other magazines or anthologies that I’ve read. Suddenly the name sticks out. When the poem was just one of many that made only a glancing impression its author remained unseen. Of course I become familiar with names for reasons other than delight – could be that they just appear over & over such that even the tired eye begins to see. Or the poet is also an essayist or publisher or vigorous self-promoter.

K. Silem Mohammad is one of the flarf poets. Flarf, if I understand it right, is a method of composition wherein the poet generates text using Google. Not sure if there are rules other than that.

Here are some lines from Mohammad’s “Heavy Horses”:

I found a performance on youtube that Mohammad gave at a 2006 Flarf Festival. He has good timing.

And in the interest of future remembering here are some random lines by other Sorry for Snake poets:

Jared White: “But eventually everything becomes community service and / Abstentions. I have a habit of getting big when I feel small / And pulling muscles in the legs. My liver doesn’t ever strain // But the eyes do.”

Gillian Hamel: “there is a figure skatingness about the overbright lights and slick / surfaces, / half of you changed colour due to rain.”
Posted by Glenn Ingersoll at 9:18 AM