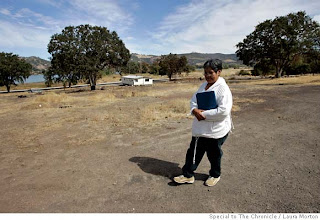 “’Ah wee-e-bee, we-e bit,’ she said quietly. ‘Fac-ma, fa-a-kepkin. Aquichin wa mit.’ The words of the old ways rolled on for several minutes, and as they came, Kelsey fixed her gaze on the ground.”

Last September SFGate featured an article on Loretta Kelsey, the “only living Elem Pomo speaker.” The dialect, says the article, is “8,000 years old … Kelsey, a quiet, almost demure woman with a steely gaze, is doing everything she can to make sure the ancient words do not die with her.” She is trying to pass on what she knows.

Speaking the native tongue only got in the way of trying to fit in, the thinking went.

"’It's a difficult language, and my dad never taught it to us because he didn't want the white kids to make fun of us,’ said Elem Pomo Tribal Chairman Ray Brown. ‘It's a real shame, now that we all look back on it, because you don't really learn it unless you grow up with it.’”

Leanne Hinton was one of my professors at Cal (though the class itself, a course in the variety of language experience in the U.S., had its bad points as well as its good), and it was to her that Elem Pomo revivalists turned.

“Together, Hinton and Kelsey dug into the campus archives and found recordings in Elem Pomo on old reel-to-reel tapes - and they included Kelsey's father telling stories, and Ray Brown's father singing.

"’California's tribes have been so fractured over the years that it's very hard to tell how many languages are still alive,’ said Hinton, who co-founded the statewide Advocates for Indigenous California Language Survival. "What Loretta is doing is special. And for the last speaker of a language, she's amazingly young.’"

Ironically (or, perhaps, appropriately, considering the history of the assimilationist program), “The Elem Pomo, like many tribes around California, is also reassessing its tribal enrollment lists, and many members - including Kelsey - are being considered for disenrollment based on historical family records.”

Is Loretta Kelsey’s a zombie language, effectively dead, though it retains a twilight existence? Is it revivable? Can the light of life flicker back into its fixed & dilated eyes? Is dezombification possible before Elem Pomo dies away entirely, before all that remains of it be a mysterious residue in an archive like Berkeley’s?
Posted by Glenn Ingersoll at 10:40 AM