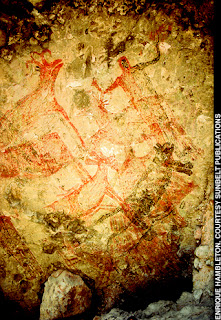 Kent and I went to a New Year’s Eve party in San Francisco. We’ve been to the house of these friends many times and I’ve looked at a set of drawings (prints?) on the wall and I’ve found their simple iconic quality appealing. The art was done by the sister of the host. Inspired by cave paintings, he says. Doesn’t know from where. Lascaux? Seems he remembers his sister saying the drawings were based on the famous prehistoric cave paintings of Lascaux in France.

So last night I was sitting and talking and sipping from a glass of champagne and I looked up at the animal shapes in the art and recognized them immediately. The drawings are details from the mural called El Raton near the town of San Ignacio in Baja California. I’ve been researching the cave paintings of Baja as part of the planning for the trip we’ll be making in the spring.

El Raton (The Rat) is apparently named after a dark figure in the mural that looks like a rat. More likely it’s a mountain lion.

Here are some excerpts from Harry Crosby’s description of the El Raton mural in his study The Cave Paintings of Baja California:

“A black mountain lion … painted representations of these animals occupy a special niche in the Painters’ repertory. For some reason … leon figures vary less than any other, animal or mono [human figure]. They all have the same long, stiff, extended tail, the short legs cocked at a similar angle. There is virtually no neck and the round, short-muzzled head is set with small round ears. Most leones are black but several red examples have turned up; the oddity is that these animals are never bicolored. They are unique in this respect.”

The image in this post comes from the bajaquest site (link); the lion is in the middle right, nose pointed up and to the right.
Posted by Glenn Ingersoll at 11:16 AM

Labels: outside US, travel