I am entrusting to you, Aurelius,
all I love most in the world, this boy, and beg
only a small favor, if you’ve ever valued
something beyond price, to be kept chaste and pure,
then guard this boy for me. I don’t mean from strangers;
it is not the man in the street I fear; he’s busy
about his own affairs. It’s you,
you and your big prick
lusting after boys, molesting good and bad alike.
When you’re outside you may waggle your erection
as much as you please at anyone you please, but spare this one,
it’s not much to ask, but if lust
runs away with you, if your dirty mind runs amuch
and you betray me and my lover, you’ll suffer,
I promise you, a terrible fate.
Before the whole town’s eyes, with your feet in chains,
I’ll shove radishes and mollets up your ass.
Posted by Glenn Ingersoll at 7:18 PM No comments:

Labels: outside US, poetry

Working my way through Harold Norse’s collected poems (In the Hub of the Fiery Force) and on page 269 I find a poem dedicated to my old poet teacher, Paul Mariah.

Blood of a Poet

they sent him up for 5 years
set bail at 100 grand
& he did time in the hole
for making love
to a boy of 18
who wanted it
both lonely in Illinois
& he came out with an education
in pain
& breaks down when he tells it
& you feel ashamed
& dumb.

I don’t know if the poem is completely factual but it tracks Paul’s life. Paul never laid out for me the whole story. I learned more from what appeared in his books than I did from him.
Posted by Glenn Ingersoll at 7:09 PM 4 comments:

Some time ago I read Raymond Luczak’s anthology Eyes of Desire, which collected writings by & about gay & trans D/deaf people. It seems he has put together a sequel, Eyes of Desire 2.

You can watch him describe it in American Sign Language here.
Posted by Glenn Ingersoll at 8:23 PM No comments: 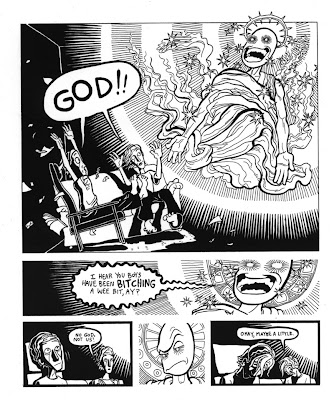 Recently read the first issue of Josh Simmons’ self-published Jessica Farm, a comic that he will be working on, a page each month, until 2049. Looks like he won’t be self-publishing any more as Fantagraphics has committed to producing new Jessica Farm volumes every eight years. That’s 96 pages each volume.

Sadly my copy of Jessica Farm was peed on by one of the cats. I threw away the other things that the cat pee seeped into. But I hadn’t yet read Jessica Farm, and it looked too interesting to just toss. I’m glad I gave it a chance. Having enjoyed it, I still couldn’t keep it. It smelled.

If you visit Josh’s website you can read a God adventure. I snagged page 2 to get you excited.
Posted by Glenn Ingersoll at 8:14 PM No comments:

In her collection of comics, I Love Led-Zeppelin, Ellen Forney includes a number of single-pagers, most of them non-fiction, even instructional. She devotes one to “How to Tip Your Server”, basing her suggestions (commands? requirements?) on interviews with two longtime servers, “Alianna is a dancer/choreographer, and Gary is a musician and ‘zine writer,” both of whom have been wait staff for years.

“15% is the minimum.” For “crappy service, a really irritating combo of bitchiness and condescension, totally ignoring your table, really, really inedible food,” among other things, a tip may be drastically reduced to “say 10%” – but no lower! Ever!

I tip. I tip because I’m supposed to. I hate tipping.

Frankly, I can’t think of any good reason for tipping. Because the servers are paid a shitty wage? They’re not the only ones. Far as that goes tips are a disincentive to unionize, least so far as poor pay leads one to get together with one’s peers.

“Remember,” tuts the book, “if you stiff your server, you’re also stiffing the hostess, busboys, bartenders, etc.” Yeah, you’re the one shortchanging all those folks, not the owner of the business who has no obligation to pay the workers what their labor is worth. If you can’t afford to tip, you can’t afford to eat out, right?

“To Insure Prompt Service”? You mean, without the tip I’m gonna get slow, crappy service? Apparently I’ll get that anyway (see paragraph 2 above).

If you get bad service, Forney’s informants insist, you tip anyway, then punish the restaurant by never going back. Yeah, right. Suppose you just had a shitty server and the next night she’s fired? How would you know? Check the restaurant’s website? Suppose there’s only one restaurant in town? I guess you’d quickly gain a rep among the servers as a bad tipper and be punished with even worse service.

Suppose you just want to be treated well; after all, you are a paying customer. If you get bad service you should complain to management? No way. According to Forney & friends your only recourse is depriving yourself.

A lot of wait staff make good money on tips, cash tips, which often aren’t declared so aren’t taxed. (Doesn’t the government assume now that wait staff get tips so require them to declare something?)

I understand that waiting tables has traditionally been women’s work, one of the few decently paid women’s jobs, and I can’t but sympathize with the idea that people ought to be paid well for good work.

But I still hate tips. And I resent waiters for expecting them.
Posted by Glenn Ingersoll at 10:00 PM 3 comments:

I’ve been reading Dick Russell’s Eye of the Whale to learn about the gray whale. Next spring we will be visiting Baja’s San Ignacio Lagoon where the grays breed and give birth. During research for the book Dick Russell became fascinated by the former whaling captain, Charles Scammon. In the 19th Century Scammon wrote the first book on gray whales and many of his observations remained until very recently the best testimony on their behavior.

I grew up in Sebastopol. On page 593 I learned Captain Scammon was an early resident. After he retired from the sea Scammon, “his wife, and two of their sons moved more than seventy-five miles away from San Franciso not long after [his whale] book came out. Scammon had purchased a small apple farm in Northern California’s Sonoma County, in the rural hamlet of Sebastopol.”

Russell quotes an 1888 history of the county: “Among the noticeably beautiful residence properties in Analy Township is that of [Captain Scammon] … Captain Scammon purchased the land in 1874 and commenced its improvement in the same year, building a beautiful and convenient cottage residence and suitable outbuildings. … The view from his study window is one of surprising beauty, overlooking as it does the Laguna with its placid waters and the beautiful meadows on the lower plateau. … In fruit culture he confines himself to a family orchard and vineyard, in which he has some of the most valuable and improved varieties of fruit and table grapes grown in Sonoma County.”

Eventually he sold the farm and moved to Oakland.

Sebastopol is still known for apples. And for grapes, though wine rather than table. My mother participated in efforts to preserve what remained of a Laguna probably much reduced by drainage and landfill from what it was in Scammon’s day.
Posted by Glenn Ingersoll at 10:17 PM No comments: