Everything in this diary was written during the London semester. As I work my way through my diary I find myself curious about people who appear in it. Sometimes I don’t leave myself many clues to follow up. I have the first names of many people but few family names. I didn’t record the last names of Chris or Shawn or Tanya or even Julie. Unless I want to do more serious research than Google that’s where it’s going to have to stand. 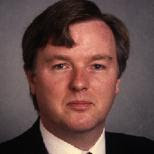 Since the father of the family I stayed with was an elected official I thought he would be easy to find. I knew him as “Robert” but a BBC page has him as “John Atkinson”. Still, that’s his picture!

Wikipedia has “Robert Atkinson” running (or, as they say in the UK, standing) for election as member of Parliament for the Borough of Kensington and Chelsea in 1997. Say the anonymous writers, “It is one of the safest Conservative seats in the United Kingdom.” In the 1997 election Atkinson (Labour) got 10,000 votes to Conservative Alan Clark’s 20,000. Tch.

Daughter Catherine seems to have gone on to a career in politics herself. I can see the eight year old girl in that face.
Posted by Glenn Ingersoll at 11:16 AM