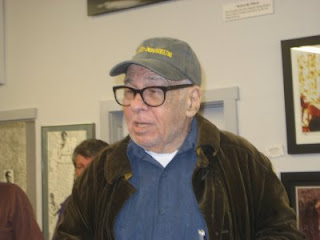 From Harold Norse’s Memoirs of a Bastard Angel:

marriage: two deluded individuals vow to deceive each other till truth do them part.

Other bloggers have written about attending the Norse reading. Michael Petrelis even has pictures. I snagged one for this post.

renegadepathos posts one of the poems Norse read, “I am not a man”. Middle of the poem Norse said, “’And it goes on like that for a while.’ He made to turn the page to another poem, until we all cried out ‘Keep reading it!’ So he continued.”
Posted by Glenn Ingersoll at 8:24 PM

hey, thanks for mentioning my short report on harold's reading this past sunday. i like that you used one of the pix i took of him. be well. michael

you're welcome. thanx for all the good work you do, mp.

i've corrected the spelling of harold's and vermeulen's names. thanks for recognizing that i do lots of good work.