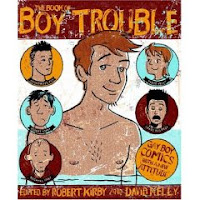 Friday I bought the new issue of Volt, Jack Morgan’s chapbook Your, and The Book of Boy Trouble, an anthology based on the mini comic Robert Kirby & David Kelly had been coediting.

Kent was taking the day off work. I suggested we shoot some pool. Afterward we stopped in at Pegasus. At $7 Morgan’s chapbook was the most expensive chapbook I ever bought! (I think I bought a broadside – one poem! – for 10 or 15 bucks once.) 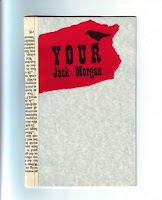 I haven’t read the chap yet. I’ve read at it. A line or three here, there. I bought it cuz I’m curious about the feller, what with the odd business about the Trainwreck Union that bubbled up on my blog a few months ago & Jack’s enthusiastic blogging. He’s got a nice eye, too. Your is the first publication of Morgan’s own Stormy Petrel Press. Jack and I have been to the same reading at least twice. Though we’ve emailed I have yet to meet him. But I must have seen his face. I guess the more mysterious he becomes the more curious I become.
Posted by Glenn Ingersoll at 4:10 PM

Sorry about it being so expensive. The next one will a bit more affordable.

I hope you liked it. If you've read it by now.

I cringe at five dollars, you know? But it is labor-intensive, mine. The next one (next month) will only cost five dollars. I am hoping to keep all future chapbooks five and under.

I haven't read it by now. Even tho it's quite short.