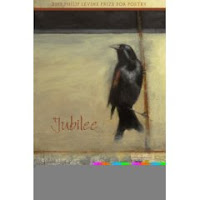 Last night I did the hosting duties at Poetry & Pizza. Barbara Tomash and Roxane Beth Johnson read to benefit Support for Families of Children with Disabilities.

We announce the reading for 7:30 and, typically, we only get a few stragglers after that time. Since we’re serving food we don’t start the reading till about twenty minutes later so the clatter of the kitchen and the bustle of people back & forth to their tables don’t distract from the poet. Last night we had a rush of ten or fifteen people between 7:30 and 7:40. There was still a line at the pizza counter at 8:00. We had to push the reading back a bit.

Barbara and Roxane gave good reading. The mic worked. People were quiet and attentive. Each had a book. (Jubilee by Johnson, Flying in Water by Tomash.)

Paul Geffner, the owner of Poetry & Pizza, has put up on the restaurant’s walls two 12 foot high poems. I’ve read them so many times I barely see them these days. One is by Paul Zimmer, the other by Galway Kinnell.

So I’m listening to Barbara Tomash, following the rhythms of her voice, when I realize, lit by one of the outside lights, a young blond woman is standing at the corner of one of the tall windows. As she is on the sidewalk I can’t hear anything she’s saying but I can see her mouth moving, her rapt expression. I tiptoed over to Paul who had Barbara’s book open in his hands and tugged him to where he could see the woman outside, her mouth still moving. “Look out the window,” I said. “She’s reading aloud the Kinnell poem.”

After P&P wrapped Paul told me the rest of the story. He slipped out to speak with her. As I suspected she was reading the poem to someone next to her (hidden from view by the wall). Two years ago, she told Paul, she had eaten at Escape from New York, loved the poem, and copied it out. Now she was with a new man (first date, I think) and she brought him by to share the experience. They had their first kiss out there on the sidewalk, Paul said.
Posted by Glenn Ingersoll at 11:24 AM