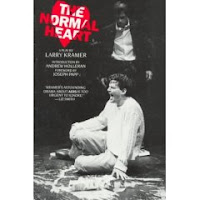 “I read Larry Kramer’s The Normal Heart today. And found a monologue in it that I’d like to save for future auditions. If or when.”

I like performing and now & then think about writing scripts. If you’re going to write in a particular form it’s a good idea to familiarize yourself with what’s been done in that form. Plus I had my eye for possible audition monologues. Plays kept disappointing me, though. I would ask myself which character I would like to play and usually the answer would be, none of them. I think I enjoy plays more in performance than on the page. I mean, if the actor portraying the part is sexy you can spend your time appreciating the visuals and the audio won’t be so insistent.

A 2005 revival of The Normal Heart gets a rave at CurtainUp. The review includes this plot summary: “Ned Weeks, the central character, is a stand-in for the author during the period between May 1981 and July 1984 when AIDS exploded from a health scare with a two digit death rate to a plague of frightening proportions and Kramer was a passionate and often frustrated activist founder of the Gay Men's Health Crisis. The story of Ned's disagreements with the other members of the organization and the the officials at City Hall is concurrent with his first ever intense love affair with a New York Times fashion and style reporter named Felix Turner. Felix is a fictionalized version of an unidentified Times reporter with whom Kramer had a romance. Another important activist whose anger and frustration matches Ned's, is a character named Dr. Emma Brookner. She is modeled on Dr. Linda Laubenstein of New York University Center who, like Emma, was victim of another plague, polio.”

A few more details from book reviewer gac1003 at amazon.com: “The New York Times wrote 54 articles about the Tylenol poisoning scare of 1982 within a 3-month period, with 4 articles on the front page. During the first 19 months of the AIDS epidemic, the same paper wrote 7 articles, with only 1 appearing on the front page. [Ned Weeks’] anger leads him into becoming an acitivist and creating a Gay Men's health center to spread the word about the epidemic. But, [Ned] runs into obstacles from unlikely places: his friends and the gay community who are scared and don't want to have their freedom of promiscuity taken away from them. And, he also must deal with his partner who contracts the disease.”
Posted by Glenn Ingersoll at 10:31 AM