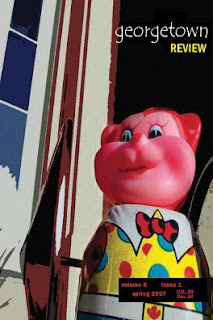 Lovely day in Berkeley Wednesday. I walked up to Euclid north of campus. There was a line poking out the door of Stuffed Inn, the sandwich & salad shop. I’d brought books & diary with me so willingly waited in line as it’s a nice place to hang out after eating. Quiet, solid tables, picturesque wood interior. I read some of Stranger in a Strange Land, a collection of columns for the UK Guardian by their foreign correspondent to America, Gary Younge. Essay after essay I’m impressed by his quick wit and informed intelligence. Also read a few poems in the fourth volume of The PIP Anthology of World Poetry of the 20th Century, edited by Douglas Messerli. I wrote in my diary, not that I could think of much to say.

After that I crossed the street to Analog Books thinking I probably wasn’t going to buy anything. However, I saw a new issue of Georgetown Review for $5 and Instant City, a new literary magazine out of San Francisco, 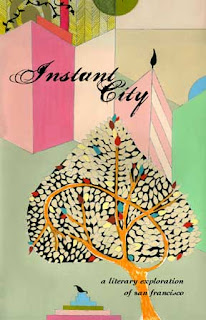 and I changed my mind. I thought about buying a coffee at the café across the street but it’s so noisy and crowded. After the cool quiet of Stuffed Inn the tables crammed with portable computers and the hubbub of voices dissuaded me from an otherwise attractive coffee drink and cookie. Like I said above, it’s a lovely day in Berkeley, so I turned and walked.

A couple blocks along I came upon a plastic bin. On the lid was written “Comics!” … “25c each” was crossed out and “Free” written in its place. Upon lifting the lid I was surprised to find the bin filled almost to the top with Justice League and X-Men and such. I pawed through them a bit but ended up closing the lid without a treasure. I felt weird about that. If there’d been a graphic novel I probably would have taken it but I didn’t want the loose issues. Glossy paper, colorful costumes, lots of action. And more than a little money spent on them. To see them just left out on the curb.
Posted by Glenn Ingersoll at 8:58 PM