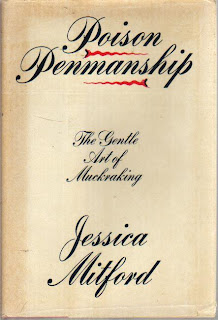 “Read Jessica Mitford’s Poison Penmanship. Have been for several days.”

Jessica Mitford is best known for her bestseller, an expose of the funeral industry, The American Way of Death. It had such an impact that twenty years after it was published I took a Death & Dying course at SRJC and the instructor devoted a chunk of the syllabus to it. I read excerpts and watched documentary updates (Mitford herself published an update in 1998) but I still haven’t read the original book. I became curious about Mitford (she was quite a character) and I found this collection of shorter works in the JC library.

One of the incidents described in Poison Penmanship (as summarized at the Albion Monitor) saw Jessica hired by “San Jose State University [for] the fall 1973 semester. The trouble began when the University ordered Mitford to sign a loyalty oath, demanded her fingerprints, and deleted the word ‘muckraking’ from her class outlines. All of which she refused or ignored. The administration fired her and canceled her classes, actions which would have devastated most academics. But not Jessica. She simply ignored the administration's order. With extraordinary student support, she kept teaching her classes although unpaid for it. She eventually signed the oath ‘under duress’ but forced the fingerprint flap into court. Finally, an embarrassed University paid her and, after the semester ended, the court ruled that the fingerprint requirement was not enforceable.”
Posted by Glenn Ingersoll at 10:15 PM

I found your comments on Jessica Mitford through a google blog alert for her name. You may be interested to know that Knopf has just published my book of Mitford's letters, "Decca: The Letters of Jessica Mitford." Her letters are important and hilarious and include some on the San Jose State imbroglio and on "Poison Penmanship." The book is essentially a biography in letters -- that is, in her own contemporaneous words.

Thanks, Peter. In searching for info on her I did see the book of letters mentioned.

Good to see that the Berkeley Public Library owns it. And that, as of today, there are 18 holds on it.