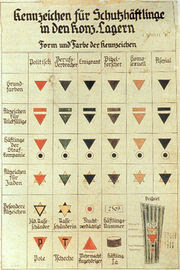 “I was in the Bear’s Den cafeteria talking to Andrea Dolin – she spotted me, sat down, we talked for awhile. Started discussing terrible things – Chris’ suicide attempt (I can’t help bringing it up when I feel fairly secure talking), The Pink Triangle and Nazi exterminations (I was reading Robert Plant’s book today), sundry murders and rapes and traffic accidents. Oh, well. It was fun.”

The most famous example of Nazi color-coding is the six-pointed yellow “Star of David” the Nazis required Jews to sew to their clothing. But I was fascinated to discover a chart of other colors on the back of Richard Plant’s The Pink Triangle: the Nazi War Against Homosexuals. Besides the yellow star -- which was two yellow triangles, one sewn atop the other -- there was the pink triangle for homosexuals, a black triangle for political prisoners, and others. It’s hard to see in the chart here reproduced but it looks like you could be several different kinds of vermin with maybe the most egregious being represented by the triangle and lesser crimes by dots and stripes. These remind me somewhat of military rank as shown on a sleeve. I doubt the Nazis kept this system in meticulous order through the end of the war, what with war’s inherent chaos, but that somebody came up with it in the first place … I don’t know.
Posted by Glenn Ingersoll at 9:00 PM