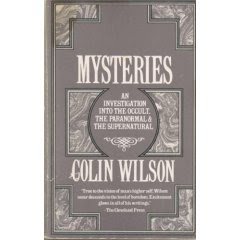 “I napped most of the afternoon. I tried to sustain the half-conscious state described in Colin Wilson’s Mysteries. Sort of succeeded for awhile but it dint feel too profound an experience. It’s comfortable …” [ellipsis in orig.]

Colin Wilson’s book is full of all sorts of fun weirdness and he presents it all so plausibly. What sticks with me twenty years later? Ley lines. Stonehenge was built on a ley line, which is a line of power in the earth, kind of like the fault line between two plates of the earth’s crust, only not at all like that. Vibrational dimensions. I remember Wilson describing dangling a ball on a chain. At length A the ball always rotated counterclockwise, at length B clockwise. These rotations corresponded to dimensions. At one point Wilson climbs a ladder so his pendulum will be long enough to allow him access to the spin of yet another dimension. I found the pendulum thing fascinating and baffling. What was Wilson learning about these other dimensions?

A description at Amazon: “Through personal experience, Colin Wilson discovered that human beings consist of a ladder or hierarchy of selves, whose upper members may be called upon at will for personal transformation and deep knowledge. … Mysteries [is] an attempt to apply his theory to all paranormal phenomena, from precognition to Uri Geller's spoon bending. He presents detailed studies of hauntings, possession, and ‘demonic hypnosis,’ as well as magic, the Kabbalah, and astrology.” Exhaustive, somewhat exhausting, amazing, strains credulity.

When people would see me reading the book I would get, “Colin Wilson? The Outsider!” I later looked up The Outsider. It’s a book of literary criticism. The Outsider, Wikipedia says, “examines the role of the social ‘outsider’ in seminal works of various key literary and cultural figures (notably Albert Camus, Jean-Paul Sartre, Ernest Hemingway, Hermann Hesse, Fyodor Dostoyevsky, T.E. Lawrence, Vaslav Nijinsky and Vincent Van Gogh) and aspects of alienation in their works.”
Posted by Glenn Ingersoll at 10:28 AM