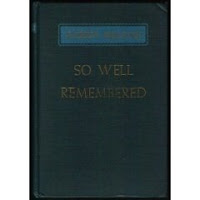 “All I did today was lie around – finished James Hilton’s So Well Remembered, and began Make Believe: the story of Ronald and Nancy Reagan. … Waiting listlessly for school to begin tomorrow.”

You’ve heard of Shangri La, haven’t you? James Hilton invented the place, a sort of heavenly Tibet, for his novel Lost Horizon. I wanted to read Lost Horizon. Then So Well Remembered fell into my lap. And I read that instead. No, I don’t remember anything about So Well Remembered. Useless, aren’t I? On the other hand, the whole novel is on the web via Project Gutenberg, so if you want to do your own research …

I was amused to find this So Well Remembered cover image on the web. The copy I had looked just like it -- there used to be an attractive dustjacket, no doubt.

Ronald Reagan was famous long before he became president. My mother hated him. Had she hated him as an actor, too? I don’t think so. But I got the idea no pleasant thoughts survived his appearance as a sympathetic witness before McCarthy’s House UnAmerican Activities Committee. Laurence Learner’s Make Believe gives the Reagan story from its defining fantasy – that by putting on roles Reagan thought he was doing heroic things, pretending to do and actually doing being little different in his mind.
Posted by Glenn Ingersoll at 7:37 AM

Did you ever read Lost Horizon? It's one of Sarah's favorite stories. Influenced, I believe, by having seen the 1973 musical when she was but a wee sprite.

I've read the book and seen the 1937 film version. At the moment I can't draw up any distinct memories of either one.

I have a paperback version of Lost Horizon upstairs (I think). I haven't read it yet but I still intend to (I think).