For a few years I gobbled up Vonnegut. Then I hit Jailbird, a book I think I didn’t get all the way through, and I wondered if Vonnegut was no longer writing what I wanted to read. After what seemed a long pause I picked up Galapagos and enjoyed it. Maybe it was me. Maybe it was Jailbird. I’ve read a few Vonneguts since. I had Player Piano on my shelf for ages. Vonnegut’s first novel. When I read that I found another Vonnegut not to like.

I remember reading Cat’s Cradle on a flight to Hawaii (a vacation with my dad’s family when I was in junior high). I loved the tiny chapters and Ice 9, a doomsday material that would instantanteously freeze solid all water into which it came in contact and all water to which that water was connected. Since it’s rare to have water here on earth not connected to other water, once Ice 9 touched its first puddle it wouldn’t be long before all water on earth was frozen up. Scary, right?

I bought used copies of Vonnegut’s books from the comic store my brother and I frequented. The comic store had a bookcase of used science fiction. I don’t remember what first turned me on to Vonnegut. I read Slaughterhouse Five twice. In eighth grade a student teacher saw me reading Breakfast of Champions and delightedly showed me the illustration of the asshole (for some reason she was unamused when I responded by showing her the illustration of the cunt). The asshole illo appears on this cover of Stop Smiling. 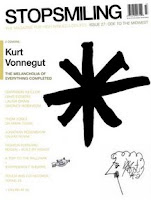 I liked the way Vonnegut would have characters recur in different books, mostly minor characters, the books not being sequels exactly as a new book would rarely build on the plot of an earlier book.

Galapagos, as I recall, had a milder doomsday than Cat’s Cradle. The human race evolves into harmless penguin/seal-like marine animals and they/we are last seen sporting in the waves.
Posted by Glenn Ingersoll at 10:13 AM