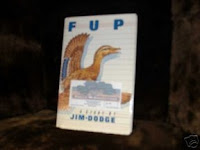 “I was bored. Had Veteran’s Day off from school and work. I didn’t study. Did cut some more hedge – only the [neighbor]’s side left to do. The hedge trimmer is screwing up. Read Fup.”

Fup is a short novel by Jim Dodge, a Sonoma County writer. Fup is a duck (Fup duck!), a pet. Fup, the book, was published by a small local press, and the book became a local bestseller. A New York publisher caught wind of the novel waterfowl and reissued it. I’d heard the buzz and was curious. Says Dodge, “I only want to be famous for a 100 miles. I had my moment of American fame with Fup -- People Magazine, Good Morning America -- and found it distracting to the point of distortion.”

I do like the idea of reading the local author. I remember being a bit disappointed. Many people love the book. There are several editions, it seems, and a few different covers. The picture I found (above) looks like the edition I read. Other more colorful covers can be seen here.

Then that Friday: “Geoffrey called at about six … He was going to come and spend the weekend [while Mom was away]. But he has a touch of the flu, and besides he’s still hung up on Daniel. Could we just be friends? He hopes so.” And that was that as far as my first boyfriend went. Two weeks from my asking him “to be my boyfriend” to him saying, “Could we just be friends?”

Did I read nothing in September and October? So far as the diary mentions it.
Posted by Glenn Ingersoll at 4:13 PM

Read it. Enjoyed it. Don't remember much about it. There was the old guy who sure he was immortal until he wasn't. I seem to remember thinking it charming.