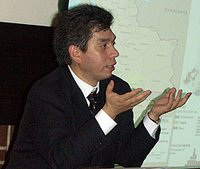 “In 2000, the United States and Colombia undertook a huge campaign to strengthen Colombian institutions and fight drug trafficking. … [O]ne specific goal … was to reduce cocaine trafficking to the United States by 50 percent over five years … by 2006 the total area of coca cultivation … would be reduced by half and the price of cocaine on U.S. streets would double.

“In an effort to achieve this goal, $10.6 billion -- $3 billion more than initially planned – has been spent. … The areas of cultivation in Colombia are … larger today than before Plan Colombia was instituted. In 1999, an estimated 122,500 hectares were planted with coca. In 2005, this number reached 144,000. … [T]he Colombian government has conducted massive spraying in the areas indicated by the United States [but] coca has reappeared in new areas or in areas that were not previously evaluated."

When Plan Colombia was set in motion coca growing regions were predominantly controlled by leftist guerrillas. Sadly the peace process meant to rein them in fell apart and Alvaro Uribe, the president elected in 2002, switched his attentions to “right-wing paramilitary death squads. … When the possibility of a peace process with the Colombian government opened up, some drug lords not previously tied to paramilitary activity began to associate themselves with these right-wing militias. According to a Colombian police report, some drug lords bought militias for sums ranging from $10 million to $50 million in order to gain political status, avoid extradition to the United States [up till then a very real concern; remember Pablo Escobar?], dialogue with the government, and disguise their drug-trafficking activities.

“Despite the spraying, the size of the area under illicit cultivation had not changed since Plan Colombia was implemented. Instead, coca cultivation had moved from areas under guerrilla influence in the southern region of the country to areas under paramilitary control. Today, coca is grown closer to Caribbean and Pacific ports and to various urban centers.”

The U.S. government (that’s us, right?) paid ten billion dollars to lower the street price of cocaine, to increase the area of coca cultivation in Colombia, and to move that crop closer to ports and cities -- not to mention soak vast acreage (and the people and animals living there) with herbicides. Fun, huh? I wonder how much of that money came “back” to the U.S. via the arms and chemicals industries.
Posted by Glenn Ingersoll at 11:20 AM

Labels: outside US, politics

I'm sure everything went according to plan ... for the Illuminati that is!

Those Illuminati, so naughty!