I looked at the new comics adaptation of The Wonderful Wizard of Oz and found it strange and not Ozzy. But as I looked at it I realized that the drawings which seemed to be made of smears of glass had a flowing yet jagged quality and the illusion of movement began to impress me; also the text was often lifted right from L. Frank Baum’s original. I didn’t buy it. I probably would have but at the time I was already late for an appointment.

I thought about it a bit more and decided to give it another look but when I inquired at Comic Relief found they’d sold out. I was assured a reorder would be placed. I stopped in yesterday and it was again on the shelf. The art is by Enrique Fernandez; it was originally published in France. At ten dollars it seemed not a terrible extravagance so I picked it up and on my way to the checkout counter my eyes lit on Mike Ploog’s comics adaptation of Baum’s The Life and Adventures of Santa Claus, discounted to ten dollars.

I haven’t yet read The Life and Adventures of Santa Claus, although I bought a copy long ago. I ought to get through a first reading of Baum’s works, if it really matters to me. Anyway, now I have two new comics versions of Baum.

Today I went for a walk in the late afternoon light. It’s been quite chilly the past few days, so I bundled up. On the loop home I stopped in at Black Oak Books. While browsing I remembered the news that Black Oak is for sale. As I’ve been carrying around a credit slip for the last year I thought I better use it up before it becomes useless. I confess I didn’t think of it till I was holding Elizabeth Macklin’s translation of Kirmen Uribe, a new book, Meanwhile Take My Hand.

At $4 it was an easy sell. Then I remembered the credit slip. It was an $8.50 credit slip. The challenge: could I find a book for $4.50? I did not. In fact, the more I looked around, the less I wanted anything. Being as these days I’m working in the library, buying books merely to read them (rather than because there is some personal connection) seems excessive. Or did so at that moment.

Eventually I came across a copy of Allan Gurganus’s The Practical Heart. 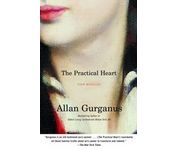 Kent has enjoyed Gurganus books so I thought I could bring it home to him. At $7 it was not $4.50. On the other hand the two books together came to less than $4, which, as I noted in the last paragraph, did not strike me as beyond budget.

Kirmen Uribe is a Basque poet. I included one of his poems in the issue of Hogtown Creek Review for which I guest-edited the poetry section and was tickled to see the magazine listed on the acknowledgments page. Ah, the reason there is an acknowledgments page – for the magazine editors! I recall I solicited poems from Elizabeth Macklin and besides her own she sent along some Uribe translations. I chose one of hers and one of his. Not long after that Uribe and his band came to town. We hung out with them at La Pena, talking mostly with the one who knew English.
Posted by Glenn Ingersoll at 11:46 AM

I have so enjoyed my trip through this site; as a poet and an avid reader, I found it both enlightening and enriching; I have often held books in my teeth...Thank You!

Thanks for stopping by.

At the library we have board books for babies and, yeah, they gnaw on those. And once in awhile we get a book back that the dog worried. But these looked like the bite marks of an adult jaw. Very neat, too. Like, as Kent suggested, the book had been bitten carefully.

Did you know that this post has been linked to from The Daily Ozmapolitan?

Huh. That's interesting. It wasn't easy to find the referring link. But there it is!