In Cold Blood by Truman Capote ... Did you know a new movie has been released covering the period Capote spent researching the book? I still haven't seen the last one.

Castle Roogna by Piers Anthony ... I bought a few Xanth books twenty years ago. I think I only read the first one. They are somewhat like Oz books in that somebody goes wandering around this land that's full of magic both hazardous and fairly ridiculous. I read Centaur Aisle recently. I'd brought the Xanth books home from my mother's house. I read Centaur Aisle first because I was sure it was one I hadn't read. Nothing about Castle Roogna is familiar either. Except the basic plot. Which has been used a million times.

Snow Crash by Neal Stephenson ... yes, I'm only a few pages in. Still. Because I just couldn't get into the adventures of a pizza delivery man and the possible tragedy of a pizza delivered late. Maybe I'll take it with me on a trip.

Twinkle and Chubbins by L. Frank Baum ... I've been thinking about rereading the Oz books. But when I nosed at my collection I rediscovered Baum books I still haven't read. Remedy that! Twinkle and Chubbins is a collection of magic tales set on the American prairie. Baum published them under a pseudonym, Laura Bancroft.

Searching for Mercy Street: my journey back to my mother, Anne Sexton by Linda Gray Sexton ... Anne Sexton comes off a mess. It was a mild year when she only had to be rushed to the hospital two or three times to get the overdose pumped from her stomach. She was sexually abusive, too.

Berkeley Poetry Review #35 ... This is a couple years old. As former editor I'm always curious about how a BPR will turn out. So far the poems have evaporated once I've turned the page.

Confessions of the Other Mother: nonbiological lesbian moms tell all edited by Harlyn Aizley ... In the first essay Amie Klempnauer Miller says, "At my favorite coffee shop, a young guy who works behind the counter frequently wears a T-shirt that says YOU MAKE ME FEEL LIKE A NATURAL WOMAN. Every time I see him, I feel reassured. If he feels like a natural woman, then there might be hope for me."

Matter #8, a literary journal published out of Fort Collins CO ... Just finished Elizabeth Gilbert's short story about a young woman's obsession with a cult novelist. She makes a pilgrimage to his cabin in the woods and stands in the snow in its burnt out husk waiting for something to seize her (literally & figuratively).

Poems for the Millennium, vol 2: From Postwar to Millennium edited by Jerome Rothenberg & Pierre Joris ... If this book were 660 pages long I would have finished it already.

Living Free: the story of Elsa and her cubs by Joy Adamson ... The further adventures of Elsa the lioness. After Born Free I kept my eye out for the next book (I actually already have the third). I was in no hurry but when Living Free showed up at Half Price Books for six bucks I was able to talk myself into it.

Swann's Way by Marcel Proust, translated by C. K. Scott Montcrieff ... Sometimes I laugh out loud. Other times I have to reread the paragraph to figure out where the subject is.

The Collected Poems by Sylvia Plath ... amazing the number of faceless women in Plath's poems. Faceless, "bald as an egg".
Posted by Glenn Ingersoll at 5:10 PM 3 comments: Links to this post 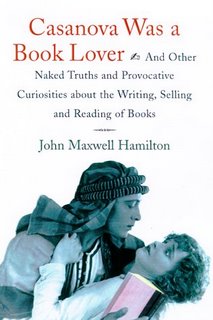 I've been reading John Maxwell Hamilton's Casanova was a Book Lover. It's a stitching together of all sorts of book related trivia. In his chapter on stolen books Hamilton says, Ask a librarian which books are most frequently stolen and you'll get this answer: "Shhhhhhh!"

"Everybody steals books," he says, and follows that up with anecdotes about Popes and professors, Academy Award nominees and tourists.

On the other hand, "In 1992, looters of a Sunset Boulevard strip mall had their way with Circuit City and Trak Auto. They did not touch Crown Books."

But do libraries keep records of which books are stolen? "In 1978, Princeton found that more than 4 percent of its library holdings were lost, along with about 10 percent of the books in the branch libraries. ... In the 1990s, the New York Public Library inventoried its 132-mile-long research collection, from which books cannot be checked out. About 1.5 percent of the books were missing. ... But who is to know for certain? ... It's not always easy to distinguish between what is overdue, what is lost in the system, or what is stolen."

He goes on, "By calling attention to book thefts, librarians can put the problem higher on professional crime-fighters' agendas. Unfortunately, news of active crime fighting suggests that books are being stolen, which is bad publicity. Taxpayers might become angry about the management of public libraries. ... For the same reason, libraries don't tell the public that each year they discard many books that are no longer in demand to make room for books people want," that is, "to steal."

This week a patron at the BPL's Claremont branch brought to the reference desk a medical diagnostician's guide and pointed to the pages he wanted to read, or rather, pointed to the place in the book from which the pages he wanted to read had been excised. The edition was eight years old so we ordered a newer one. But this patron was also looking for our Physician's Desk Reference, which is a guide to pharmaceuticals. I couldn't find it either. Has it been stolen?

I wonder if the Claremont branch, being a block away from a hospital, is more prone to losing this particular kind of book.

One of the daily tasks these days is hunting up books patrons have placed requests on. A library user can ask to have a book transported from any BPL branch to a more convenient BPL branch. We run about the stacks twice a day gathering these up. We tend to get between 20 and 30 requests each day. Most days we are unable to locate one or two of these. That seems like a lot. But I'm not going to say the missing books were all stolen. Many an item will turn up, often when another patron steps up to the desk to check it out.
Posted by Glenn Ingersoll at 4:41 PM 2 comments: Links to this post 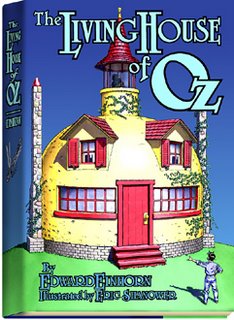 Yesterday the books I ordered from Hungry Tiger Press arrived:

The Living House of Oz by Edward Einhorn, illos by Eric Shanower

The Scarecrow and Tin-man of Oz, text & illos by W.W. Denslow (this volume collects stories the original illustrator of The Wizard of Oz created for newspaper funny pages after he broke with L. Frank Baum and the Broadway adaptation of Wizard was a big success.


Downtown today I picked up The Gay Metropolis, a history of gay New York of which I've heard good things. It was $1 on the clearance shelf.

And I bought Harvey Pekar stuff. The new issue of American Splendor and the new paperback of The Quitter.
Posted by Glenn Ingersoll at 2:37 PM 2 comments: Links to this post